It goes without saying that the world is in really bad way right now. As I write this, nations all around the globe are struggling to contain a global pandemic that has already claimed over 100,000 lives, infected more than 1.6 million people, and left millions more financially devastated. In addition to this, entire countries […] 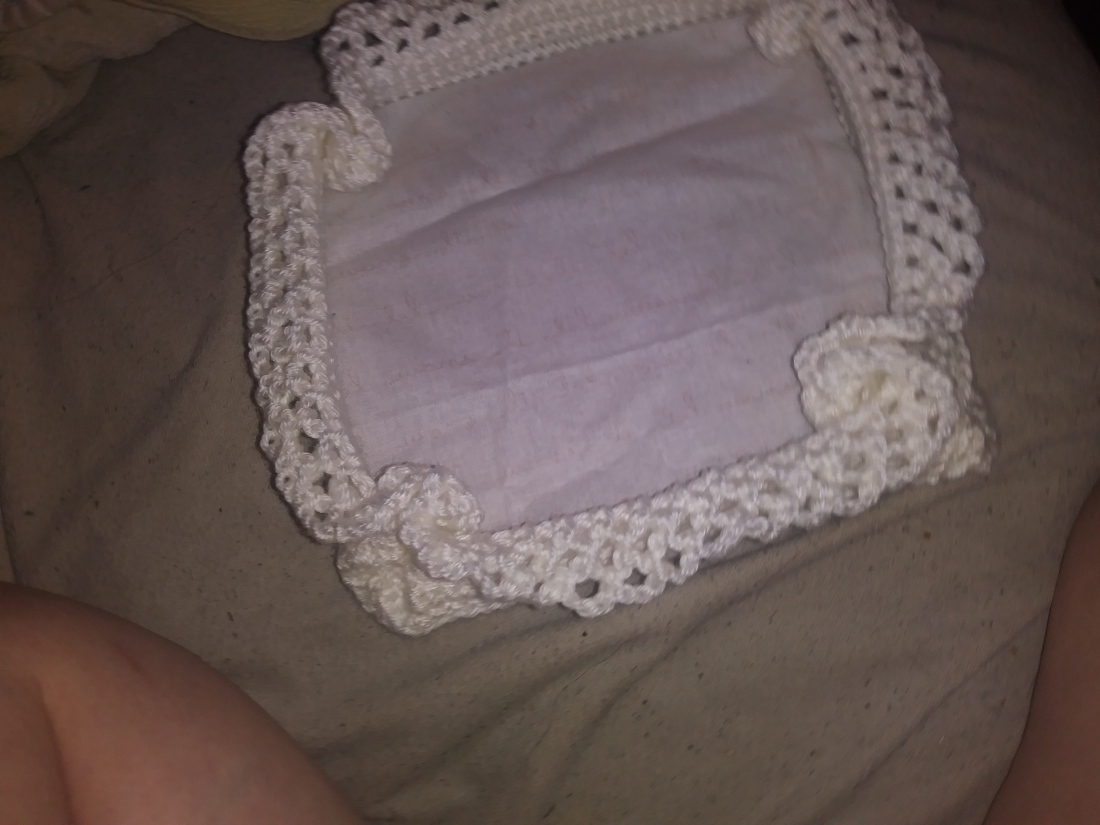 I have realized I don’t take very good photos. Please forgive me as this isn’t really a field that holds much interest for me except for sharing. I’ll try to do better.

This little tray is something I made myself without a pattern. It turned out better than expected even though it was off the cuff. I made it using Red Heart Super Saver yarn in white and some cardboard I cut to size and covered with some fabric remnants I had leftover after lining a purse I made some time ago.

I hope you enjoy this! I know it’s made a welcome addition to my bathroom! 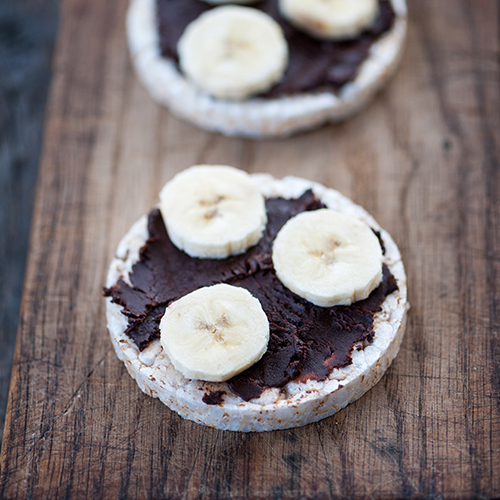 This chocolate spread is so good that you will want to lick the knife clean! Has no nuts and white sugar and tastes great on everything.

My friend told me this recipe and I never thought will taste so good. It’s healthy and it takes you like 5 minutes to make it.

Put everything in a cup and mix it with a fork. You can spread it on a banana, rice cookie, or on waffles. Try it like this and then you can change the proportions. If you don’t like so much cocoa, use less. If you need to be sweeter use more honey or syrup. 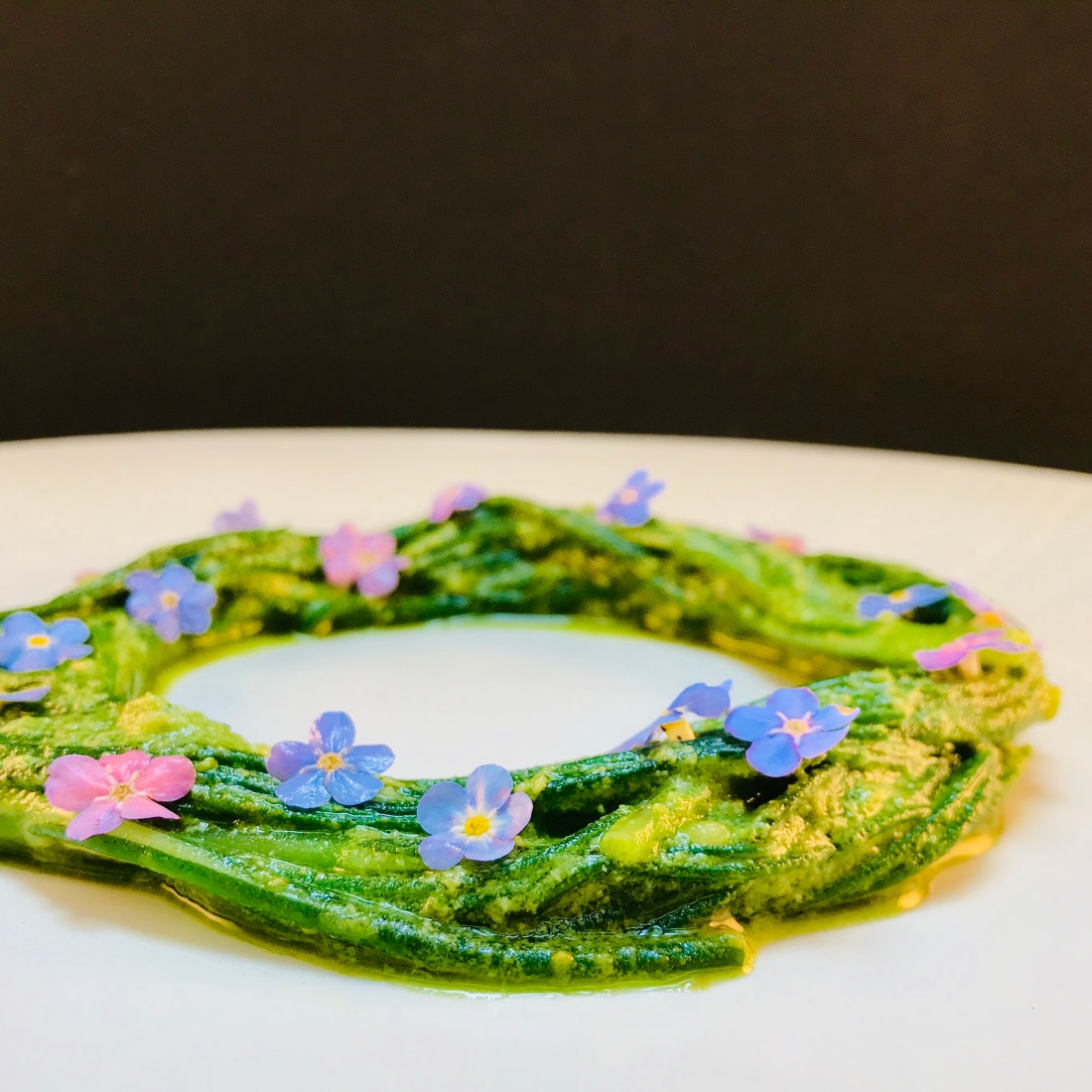 Pick a handful leaves of wildgarlic, clean them and finely blend them together with the same amount of walnuts, the double amount of olive oil and some apple cider vinegar and fleur de sel to taste.

Clean barbadifrate (agretti) and blanch it for a couple of minutes. While still warm, toss it in the pesto.

Twirl the agretti and arrange it into a circle. I used a ring mold. Decorate with forget-me-not blossom.

I’ve gotten many suggestions for what to do while stuck inside the way we all are. I took one suggestion: watch videos on the internet, and I fell down a rabbit hole like you wouldn’t believe! I was lost for hours following links, checking out videos and watching channels. I haven’t subscribed to anything yet, but I have developed a great appreciation for vloggers let me tell you.

One site I am going to be going back to regularly – for now – is Hideout TV. This comes out of the UK it appears. I’m mainly watching cooking videos as I haven’t looked at much else because the cooking videos have me hooked. LoL.

There’s a cook on there called Pettite who is just so energetic when he talks, he reminds me a bit of Julia Child and her cooking show. In fact, of all the cooks on here, I like him the best. He uses rock music in his intro and doesn’t have music drowning out his voice.

There are videos on here that don’t have the cook speaking, You just see their hands and there’s writing overlaid on the video. There’s always some funky music playing as well, but I find these boring.

I’m enjoying watching other people cook. The variety of videos on here is nice to see too. I’m not just watching vegan dishes, I’m watching all kinds of food being made. Just watched a video on how to make bread in a Dutch oven. 🙂

I’m a solo act at home so cooking for me is something necessary but not really that much fun. I try to eat healthy so there’s that too. Still, I don’t go all out on a meal unless I’ve seen something I want to try. That led me to learning how to make pierogies from scratch as well as Vietnamese Pancakes. Those are addictive!

Not only do they make dishes, they make sauces – OMG!! Yes, I’m watching the channel while I write this. I love chunky sauces like chutney. I also like sauces that are all natural like Tahini sauce. I don’t use a lot of sauce when I cook because I prefer food that’s flavorful on its own. Still, a good chutney with veggies or cheese is quite delicious.

You can find Hideout TV here and I hope you like it. 🙂

I love to write about everything. Writing relaxes me.

Words and Pictures from the Middle East